[button color=”green” size=”medium” align=”left” link=”https://www.dendy.com.au/VenueTicketing/Start.aspx?sessionId=30712&cinemaId=284a72e0-31dd-4e5c-b0c7-7d5858957b73″]Buy Tickets[/button]SATURDAY 7TH SEPTEMBER, 9PM | DENDY OPERA QUAYS
FEATURE, MEXICO, 2011, KENYA MÁRQUEZ, 100 MIN, SPANISH WITH ENGLISH SUBTITLES
A mother’s love is like no other love. Ramona is a doting mother and perhaps more than a little obsessive. When her adult son, Osvaldo, fails to return home after storming out three days earlier, she is sent into a paranoid tailspin. The most obvious course of action? Head straight to the Forensics Medical Centre to identify corpses in the hope that one might be Osvaldo. At the Forensic Centre, Ramona is befriended by Milagros, the centre receptionist, who offers to help her find Osvaldo. She also meets the odd and slightly unkempt Genaro, an amateur forensic enthusiast. Then, upon arriving home, she notices a young woman, Mariana, moving in next door. Could the mysterious Mariana be the key to finding Osvaldo?
Who can Ramona turn to, who should she trust, if anyone at all? 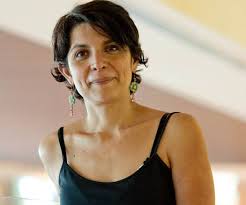 Kenya Marquez earned her degree in Communication Sciences and Techniques from the
Universidad del Valle de Atemajac (UnIVA) in 1993 and graduated from the screenwriting
program at the Centro de Capacitación Cinematográfica in 2006 After an extensive professional experience in media production – radio and press – she made her feature short debut with Cruz, 1997 She was general director of the Guadalajara Internacional Film Festival (2002–2005) and went back to filmmaking with the short Señas particulares in 2006 She has taught at university level at UnIVA and is currently working at the University Center of Arts, Architecture and Design.

[/tab]
[tab title=”Reviews”]
Comedy of Dark
How much more can you delve into the undervalued terrain of black comedy than setting it around a morgue, plotting it around a lonely old woman’s search for her presumably dead only child and an abused young woman’s bloody revenge, offing one of the only likable characters, and revelling in nonstop miscommunication and misinterpretation? Not much, and Marquez, in her first feature at the age of 39, does it masterfully in this revisit to the nearly lost Mexican genre of mature dark humour with plenty of bite.
Read on at ….http://www.screendaily.com/reviews/the-latest/expiration-date/5035752.article
[/tab]
[/tabs]